Just added to your cart

Adding product to your cart

Relive the fall of the order with the Fallen Combo.

Add this combo to your cart to recreate the Fallen Order experience for 20% OFF!

If you would like more information about shipping and availability, please Contact Us and we will be happy to assist!

I ordered my Fallen combo 6 days ago and am very happy with it. Am excited to order more from kyberlight

R
Ryan Tyler
A force to be reckoned with...

I absolutely love my Kyberlight. This is my first high tech/realistic saber. I spent several years looking for the best saber for a price that wasn't gonna drain the Force out of my bank account. I was already going to buy Cal's Legacy lightsaber when I go to Disney World later this year. I didn't want to have to mod it myself to simply be able to change it to the color I wanted. On top of Disney having a terrible selection for their version of a "custom" lightsaber
This company has nailed it with their "dynamic swing" with the new V5 chip. The only thing that would make it cooler is the ability to add your own kyber crystal. It's worth the buy! The Fallen order bundle is true to the original spirit of Cal's lightsaber.

After looking through a bunch of different companies to find a suitable lightsaber that wasn’t outrageous in cost I found kyberlight. All I can say is that I’m blown away with everything

I’m so glad I purchased the fallen order bundle. The build quality is great, it’s easy to put together and the sound quality that comes from the unit is great. All the features that come with a V5 saber would cost well over $800 from any other company. I will highly recommend kyberlight to all my friends and coworkers who are into Star Wars and are looking for a saber.

I wanted a quality, dueling-ready Saber @ an affordable price. Didn’t have to look any farther than Kyber Light! I purchased a pair of The Fallen combos the create a saber staff. I love it! Only thing lacking is a proper, hilt to replicate a Cal Kestis style saber.

These Kyber Light sabers are so budget friendly, I ended up making back-to-back orders. Now I’ve got (5) Kyber Lights to wield around

I don't have much to say about this pack that isn't already said by the description itself. You get a Knight pack, and the Fallen Order bundle together in one deal. (As of this review, it's the only way to get The Fallen Order bundle as the accessory bundle itself is sold out.) In my opinion The Fallen Order accessories are some of their best ones, though be warned they're a bit bigger than some other accessories, so they won't work with all other accessories. But to be honest, the design of the sleeve and emitter more than makes up for that limited compatibility fact. It's honestly my favorite sleeve and emitter combo from Kyberlight.

Do take note though, you will get two of the same pommel. The reason for that's simple, Kyberlight sabers used to come with the Nova pommel back in the day as their default pommel. The Fallen Order bundle was made back then, and used to be unique for having this low profile pommel cap. As you can tell the low profile pommel was pretty popular, so it became the new standard pommel with a fresh Kyberlight saber.

Edit: I've lowered my review score after a few months, as recent sabers seem to have taken a large hit in quality. Every new one I've gotten has been terrible. Loose insides, (they stopped putting foam inside the sabers for whatever reason, so the speaker and whatnot just loosely jostle around) speaker goes out right away, the LED is dim and missing the lens, (meaning it doesn't blend color properly, and thus you get a dim blade that's half green half red, instead of yellow) thus making the saber little more than a shelf toy. It also arrived with some of the wrong parts, and missing half of its parts. Took ages to get the rest of my orders. They were good back in Jan, but after that the quality has taken a huge hit. I've gotten a couple of sabers, and they've all come with all of these problems. 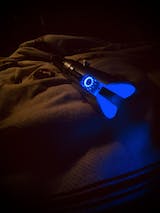